Interactive 3D view of Red Arrows display manoeuvres, you can interact with the manoeuvre using buttons and mouse.

Click and drag the manoeuvre to view from any angle, or zoom in

Interactive 3D view of Red Arrows display manoeuvres, you can interact with the manoeuvre using buttons and mouse.

Click and drag the manoeuvre to view from any angle, or zoom in

Where to see the Red Arrows display in 2022

Locations where the Royal Air Force Aerobatic Team will display across the United Kingdom in 2022 are detailed below.

Overseas dates will be released in due course and this list does not include flypasts.

Exact times of each aerobatic display will be confirmed by event organisers when available.

Dates, locations and times are subject to change up until the event itself.

The RAF Events Team - rather than the Red Arrows - collate bids from airshow organisers and task the Service's display assets.

Also on this page, you will find information and a link on how to request a display or flypast for a public event.

The Red Arrows’ aerobatic display changes each year. On this page, you can see the individual manoeuvres which featured in the 2021 season’s full show. The new 2022 display will be revealed on successfully being granted Public Display Authority - usually in May.

The first half of the Red Arrows’ display consists of synchronised, formation aerobatics, followed by a more dynamic second half.

Reds 1 to 5 form the front section of the team’s formation, known as Enid, and Reds 6 to 9 make up the rear part. The Synchro Pair, Reds 6 and 7, perform the highly-popular opposition manoeuvres during this latter section of the show. During a display, Red 10 acts as the team’s Supervisor who maintains two-way radio contact with the Team Leader. He also provides the commentary.

There are three types of display the Team Leader can elect to fly – full, rolling or flat. To carry out a full, looping, display the base of the cloud must be above 5,500ft to avoid the aircraft entering the cloud at the top of the loop. If the cloud base is less than 5,500ft, but more than 2,500ft, the team will perform the rolling display – substituting wing-overs and rolls for the loops. And when the cloud base is below 2,500ft, the team will fly the flat display, consisting of a series of flypasts and steep turns.

The Red Arrows begin training for the forthcoming season almost as soon as the previous year has ended.

Typically, winter training starts in October, with small groups of three or four aircraft formations. Each pilot flies three sorties a day, five days a week, and the formations grow in aircraft number as training progresses.

These flights involve a thorough brief, debrief and discussion to ensure safety is paramount and the formations are precise. One complete cycle consisting of these elements lasts about two hours, usually with a 30-minute flight.

Winter training lasts until mid-March or early-April, when the team usually moves overseas to a location with more predictable, settled weather to maximise flying hours and perfect the display. This is known as Exercise Springhawk.

During Springhawk the team is assessed by senior Royal Air Force officers, with the aim of gaining Public Display Authority. If this is awarded, the team’s pilots change from green coveralls into their famous red flying suits and the ground crew are allowed to wear their royal blue display coveralls.

The season then officially begins and public performances by the Red Arrows are permitted.

During the display season, the Red Arrows often carry out two shows and several flypasts in one day - using various locations across the UK and overseas as operating bases.

When the season is underway, you can often find times of arrival and departure from airfields, as well as information on show times and flypasts by visiting our official social media channels - on Facebook, Twitter and Instagram.

However, the times and details are subject to change - without the opportunity to provide live updates - and the schedule should not be used by aviators or for route planning. Way points and navigation details are also not to be confused with official flypasts and public events or displays - the Red Arrows do not always transit at low level heights and people may be disappointed if they go to these locations expecting to see the aircraft.

Request a display or flypast 2023

In a huge loop, this is all nine Red Arrows jets arriving back at RAF Scampton in a very efficient – and visually-appealing – break-to-land procedure known as a Magnum. 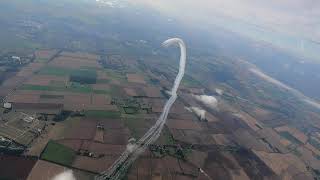 In a huge loop, this is all nine Red Arrows jets arriving back at RAF Scampton in a very efficient – and visually-appealing – break-to-land procedure known as a Magnum. 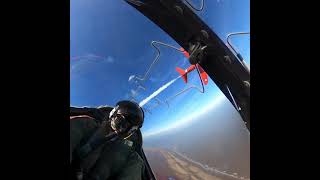 Rolling with the Red Arrows

This incredible footage takes you inside – and upside down – in a Red Arrows jet during a training flight by the team along the Lincolnshire coastline. The manoeuvre is called Mirror Roll and, in this clip, you can see why Reds 6 and 7 are known as the Synchro Pair, as they roll together with huge precision, above and below. 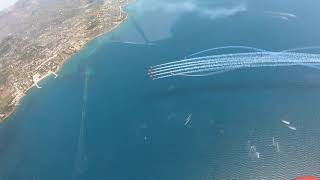 See how the Red Arrows’ skilled photographer, flying with Red 10, gets footage of the team carrying out a training flight in Greece. In this video, RAF photographer Corporal Adam Fletcher gets film of the Tornado manoeuvre from above. 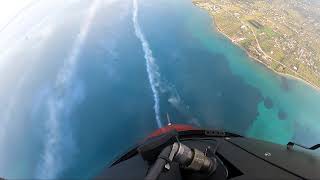 Introducing a brand new manoeuvre for the Red Arrows - this is Boomerang. Watch Reds 6 and 7 carry out this huge move, as the finale for their part in the 2021 display by the Royal Air Force Aerobatic Team. 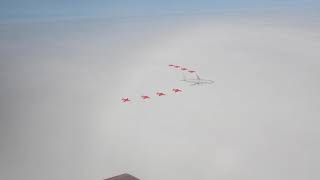 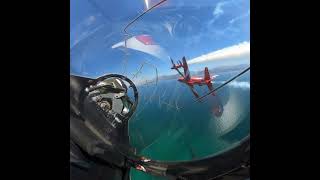 This is what it’s like to fly with the Red Arrows, as the team carries out a manoeuvre called Slalom during the 2021 display season. It shows the precision flying needed by Reds 2-5, as they swap sides in the formation.